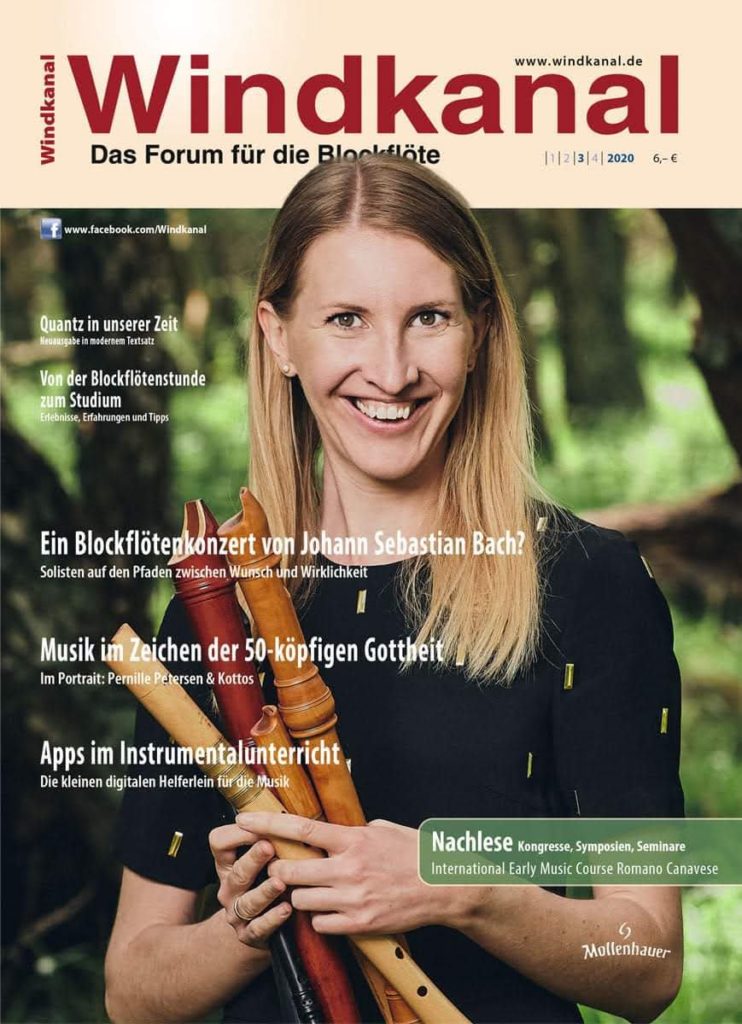 The Danish recorder player Pernille Petersen (*1983) begins her programme with Bach’s famous A minor partita for flute solo BWV1013. The four middle dance movements are probably from a work for a string instrument, which presents the interpreter with extreme breathing problems. Petersen solves them brilliantly in her own way. Because the original version lacks the prelude and the concluding gigue, Viggo Mangor has composed two movements to complement the Partita, allowing Pernille Petersen to play a complete suite. This solo Partita and also L’inconnu by Quantz are presented in an agile and rhetorical way.
The approach of the ensemble composed for these recordings to Telemann’s playful trio sonatas and Handel’s sonatas is exemplary. Calm and steadily pulsating performances enhance the richness of this music. In addition to all the virtuoso performances, the tonal versatility is also enchanting. Whether in the gallant, the strict or the entertaining passages, the musicians offer immensely lively interpretations, which are further supported by the historical instruments and which always radiate a certain charm. It is good to hear this music played without too much intellectual seriousness, but instead with a serious joy of performing.

“This new CD is a recording based on a printed collection of flute and basso continuo sonatas by Francesco Geminiani and Pietro Castrucci printed by J. Walsh (1718-1725) in London and adapted from the violin sonatas. Both Geminiani (1687-1762) and Castrucci (1679-1752) were virtuostic Italian violinists who worked with Handel as freelance musicians for the British aristocracy and London houses, as well as elsewhere in Northern Europe.
The cosmopolitan, virtuostic vitality of these works are reflected in the performances of the Danish recorderist Pernille Petersen (winner of the Moeck/SRP Solo Recorder Competition in 2009), the harpsichordist Gunnhild Tønder and English baroque cellist Tom Pitt. Throughout this CD the ensemble displays great precision and teamwork. Most effective are two sonatas by Castrucci taken from the op. 1 violin sonatas (no. 2 and 3) and adapted for the recorder. Unlike the violin sonatas adapted by Walsh to fit on a treble recorder, this ensemble has kept the original key by using a voice flute (Sonata no. 2) and descant (Sonata no. 3 op. 1).
Castrucci’s Sonata no. 2 in E minor is certainly very suitable on the voice flute. The opening Adagio is very powerful, sonorous and melancholic. Petersen certainly communicates raw emotion in this first movement that gains momentum and tension in the second movement, Allemanda. Here the continuo team help propel the recorder to a dramatic pause at the end of the movement and a bizarre Adagio cadenza with a stately Aria Francese to conclude this breathtaking sonata.
Castrucci’s Sonata no.3 in G Minor, played by Petersen on the descant recorder, begins with raw emotional harmonic tension. In this Adagio/Andante movement the tempo isolates nervously between rich and beautifully sustained suspensions and wild trills to energetic arpeggiated passages by Petersen and her continuo team that are hypnotic to listen to. In the second movement, Allegro Giu, the breathtakingly virtuosic recorder part is driven by the exiting and tightly rhythmical teamwork of the harpsichord and cello. Again this is followed by a quirky and frantically exhilarating dance Giga Allegro. Here Petersen, Tønder and Pitt display the wonderful talent and virtuosity of fantastic musicians who work amazingly well as a team. Hopefully this is the first of many recordings by this brilliantly engaging ensemble.″

“If I had to describe Pernille’s performance in one expression it would be “speIIbinding”, she is clearly carving out her performing persona and her choice of repertoire was a real showcase of this lovely
and expressive player emerging. I was in the audience at the Final in 2009 and not only was she a worthy winner but one of her many qualities is her ability to engage with an audience and draw their attention to her story-telling; she is an honest performer, expressive, with great technical control and a very good chamber musician too.
…
Vertical Song 1 by Toshio Hosokawa came next and here I felt Pernille really came into her own as a performer. It was a theatrical performance of a beautifully still and spiritual piece, with so much great and confident variation of tone and technical command. There was a wonderful stillness in the audience as the piece started and the storytelling was fantastic.
…
The last piece of the first half was the Castrucci Sonata Op. 1 no. 10 in D I\/Iinor. It was a great finisher, expressively played. These sonatas are ernille really brought it to life. She was joined by a wonderful continuo team in Gunhild and Thomas and together they made it great.

Feuerspiegel for recorder and accordion by Mogens Christensen (who was present at the concert) started the second half of the performance and was one of the pieces brought by Pernille that were written for her in 2010. This was my favourite piece of the whole concert. To quote Mr. Christensen: “Feuerspiegel neither imagines anything nor tells a story. lt is just meant for what it is, music. The title is borrowed from SchiIIer’s famous ‘Ode to Joy’ and it came to me when the mirroring of the parts began to take over.”

There was a perfect marriage between the two instruments, a symbiotic—Iike communication between the two performers and at points the listener didn’t know where the recorder sound ended and the accordion started, suiting the title which loosely translated means ‘fire mirror’. lt was pure magic the way these two interacted, the breathy tone of the accordion in complete harmony with the recorder — gorgeous! There was a very clever use of different recorders and the range got lower as the piece progressed.

Another Castrucci sonata followed, this time Op. 1 No. 2 in E Minor, which Pernille played on the voice flute. Again there was beautiful ensemble work from these accomplished musicians.

Entourage for Recorder by Kasper Rofelt was written for and in collaboration with Pernille in 2010 especially for this concert. Pernille wished for “a work that was not so virtuosistic. but more like a calm, musical interlude in a very expressive and demanding programme”. Of it the composer says, “The soloist is examining her surroundings where more than one idea is elaborated and combined in several different ways. You can view the material of the music as a landscape to be examined in a given time frame.” This was a lovely atmospheric piece; a real palate cleanser.

Pernille concluded her prize winning concert with the final Castrucci sonata ofthe evening this time Op. 1 No. 3 in G Minor which she played on the descant recorder. This was a brilliant and once more virtuosic performance of the Castrucci set.

As an encore Pernille surprised and delighted us all with a rendition of La Notte by Vivaldi, expertly accompanied by Bjarke on the accordion, full of effects that transported us all to a stormy night somewhere in Venice. Bravo, Pernille, for a wonderful concert a very promising rising star indeed!”

“Ms. Petersen’s charming musical personality shone throughout her varied programme, which was accompanied by equally charming and attentive harpsichordist Gunnhild Tender and included music by Berio, Castrucci, Christensen, Hosokawa and Uccellini. Of her interpretations, I’d say that her virtuoso rendition of the C major Sonata by Pietro Castrucci remains foremost in my memory, as does her glorious sound in her opening Estampie ‘Principio di Virtù’.”

“Opening with an anonymous piece ca. 1390 Principio di Virtu, Petersen’s wide-bore recorder was the perfect instrument for the fast flourishes and long complex lines that were played from memory. Berio’s Gesti (1966) was powerful and played with confident ease. There was an innate sense of timing in this complex piece and it was a memorable performance. Warm applause followed. Hosokawa’s Vertical Song 1 (1995) showed a most effective use of the voice with Peterson holding the audience’s attention in the pauses. She played this with commitment and power and a pure, sure, sense of pitch. For the Uccelini Sonata Nona Peterson was joined by the harpsichordist Gunnhild Tønder, giving a nice change of style and tone in the programme. Christensen’s Birds of a Spring Night (1993/4) was played with humour with very bird-like chirrups and very neat fingering and articulation earning enthusiastic applause. Peterson was obviously at home in Telemann’s Fantasia in C minor, making the most of her fine technique and tone. Unfortunately the last movement was interrupted by an announcement that a suspect package had been found in the Painted Hall. After some minutes Petersen was allowed to continue and calmly concluded with a very convincing and fast 4th movement. She returned to the platform with Gunnhild Tønder to give a beautiful performance of Castrucci’s Sonata II in C major, which received loud applause.”

“I suspect that Pernille Petersen’s poised charm, and the natural musicianship displayed in all her phrasing, tipped the balance. She played Berio’s Gesti as music (!) and was completely unfazed by a security alert in the middle of one of her pieces, carrying straight on afterwards as if nothing had happened.” 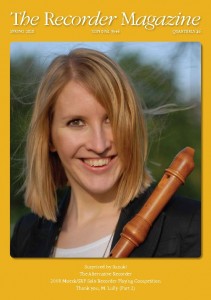 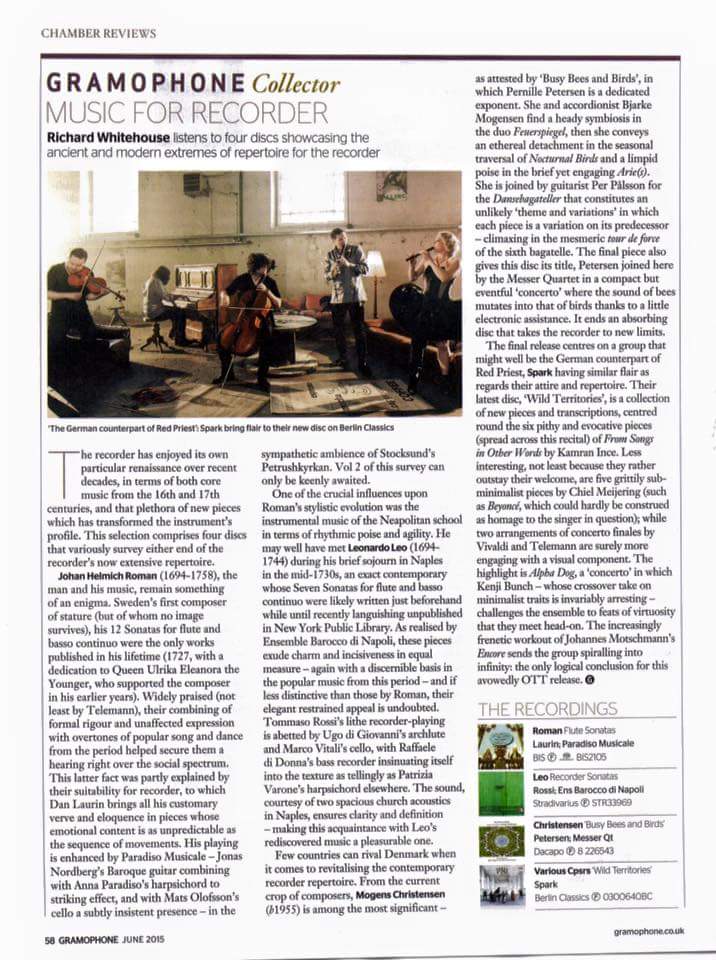